The Radeon RX 6600 XT is AMD’s performance-segment graphics card that was first launched on July 30th, 2021. Featuring a Navi 23 graphics chip based on the AMD RDNA 2 architecture, the Radeon RX 6600 XT is capable of delivering incredible 1080p gaming experience, as well as competitive 1440p gaming experience. The card also has ray-tracing capabilities, making it a viable choice for those who don’t want to use NVIDIA’s graphics cards.

The reference Radeon RX 6600 XT comes with a base GPU clock speed of 1,968 MHz, and a boost clock of 2,359 MHz. Just like all the other RX 6000 series graphics cards, this one also sports unusually high core clocks. However, the Radeon RX 6600 XT is a relatively energy-efficient graphics card, since it features a TDP of 160 watts, and requires only one 8-pin connector to run.

Speaking of its performance, the Radeon RX 6600 XT is a very interesting graphics card. In titles like Borderlands 3, Death Stranding, Dirt Rally 2.0, and Assassin’s Creed Odyssey, it outperforms the GeForce RTX 3060 at 1080p by over 20%. However, this card struggles with ray-tracing, since the NVIDIA’s RTX 3060 outperforms the RX 6600 XT in most games featuring ray-tracing, such as Control, Metro Exodus, and Battlefield 5 (by up to 40%). With DLSS, the GeForce RTX 3060 delivers even higher frame-rates, meaning that the RX 6600 XT is no match for it, at least until AMD’s FSR technology starts seeing its first implementations.

When it comes to mining, the Radeon RX 6600 XT falls short of expectations, as this 2021 graphics card is able to deliver the same hashrate as the four-year-old Radeon RX 580 on Ethash algoritm (around 32 MH/s). However, the power consumption of this card is simply fantastic, since the RX 6600 XT consumes only around 80 W while mining Ethereum, and that is without any undervolting, underclocking, or custom BIOS mods.

This card is only available in AIB variations. However, because each variant has different cooling and GPU clock speeds, we’ve created a list of the top aftermarket models to assist you in choosing the perfect card. To view more, scroll below.

Sapphire PULSE Radeon RX 6600 XT delivers excellent performance, with extremely outstanding thermal results, and high-quality PCB design. Thanks to its dual-fan cooler, the GPU stays below 60°C under benchmark and gaming loads. It also looks amazing, with no irritating RGB lightning to distract you from gaming. If, however, you are in pursuit of all the extra fancy features, such as dual BIOS switch, RGB LED, and exchangeable fans, then consider checking out the Sapphire NITRO+ RX 6600 XT.

Despite its simple appearance, this card features 23 MHz higher GPU boost clock than the reference model, and comes with hybrid fan blades that combine the best from axial and blower-style fans. Performance-wise, the Sapphire PULSE RX 6600 XT can deliver almost 100 FPS in games like Horizon Zero Dawn and Borderlands 3 at 1080p resolution, which is quite impressive. The card also runs very quietly, so if you are looking for a nice and simple GPU for 1080p gaming on ultra settings, then this is the card for you.

The ASUS ROG Strix Radeon RX 6600 XT OC is the flagship variant of the RX 6600 XT from ASUS. Featuring an overclocked GPU boost clock of 2,607 MHz out of the box, this card is an excellent choice for 1080p and 1440p gaming at highest settings with refresh rates going over 60 Hz. The card also comes with premium PCB components, allowing it to easily reach higher core clocks through overclocking, and thus deliver up to 9% additional performance.

Speaking of its aesthetics, this card features nice heatsink design and follows the ASUS ROG design language from previous releases. The card also features dual BIOS switch, and the cooling is very efficient, since the GPU core never exceeds temps higher than 70°C, even when overclocked. Unfortunately, the fans on this card are pretty loud (around 40 dB), but you can always switch to silent BIOS if you get fed up by their irritating noise.

The MSI Radeon RX 6600 XT Gaming X is a nice all-around graphics card in terms of Full HD performance, cooling, and acoustics. Featuring a GPU boost clock of 2,607 MHz, this card is around 3% faster than the reference RX 6600 XT. The card comes with an overkill dual-slot heatsink featuring thermal power design of 250 W, meaning it runs cool and quiet. Under full load, its GPU core never exceeds temps of 65°C, and the fan noise is only around 33 decibels.

With a little GPU tweaking, this card can be pushed to very respectable 2,800 MHz, meaning it can deliver up to 7% better performance if overclocked. The MSI RX 6600 XT Gaming X does exhibit a little bit of coil whine, which overall isn’t a big deal, but can become bothersome. The card also features RGB lighting, and thanks to its compact dimensions it can fit even in smaller PC cases.

Measuring only 179 mm in length, the ASRock Radeon RX 6600 XT Challenger ITX is a perfect graphics card for gamers who want to build a powerful, yet compact small form factor gaming PC. The card features one huge striped axial fan which delivers enhanced airflow not only from the front, but also from its bottom side. Although the card has no RGB lighting, it has a nice-looking metallic backplate which also contributes to the card’s cooling.

Unlike many other card, this one has two HDMI and two DisplayPort connectors. Despite its small size, this card features a proper Navi 23 graphics chip, meaning you can except very good performance from it. Speaking of its thermals and acoustics, this is a surprisingly good SFF card, since its huge single axial fan can keep the GPU below 82°C at 50% RPM, while being almost inaudible. Overall, the fact that this card is inexpensive, comes with a backplate, and operates silently is most praiseworthy. Its only flaw, albeit a minor one, is that it may require a bit of tinkering until you find out the best balance between the fan RPM, noise, and GPU core temperature. 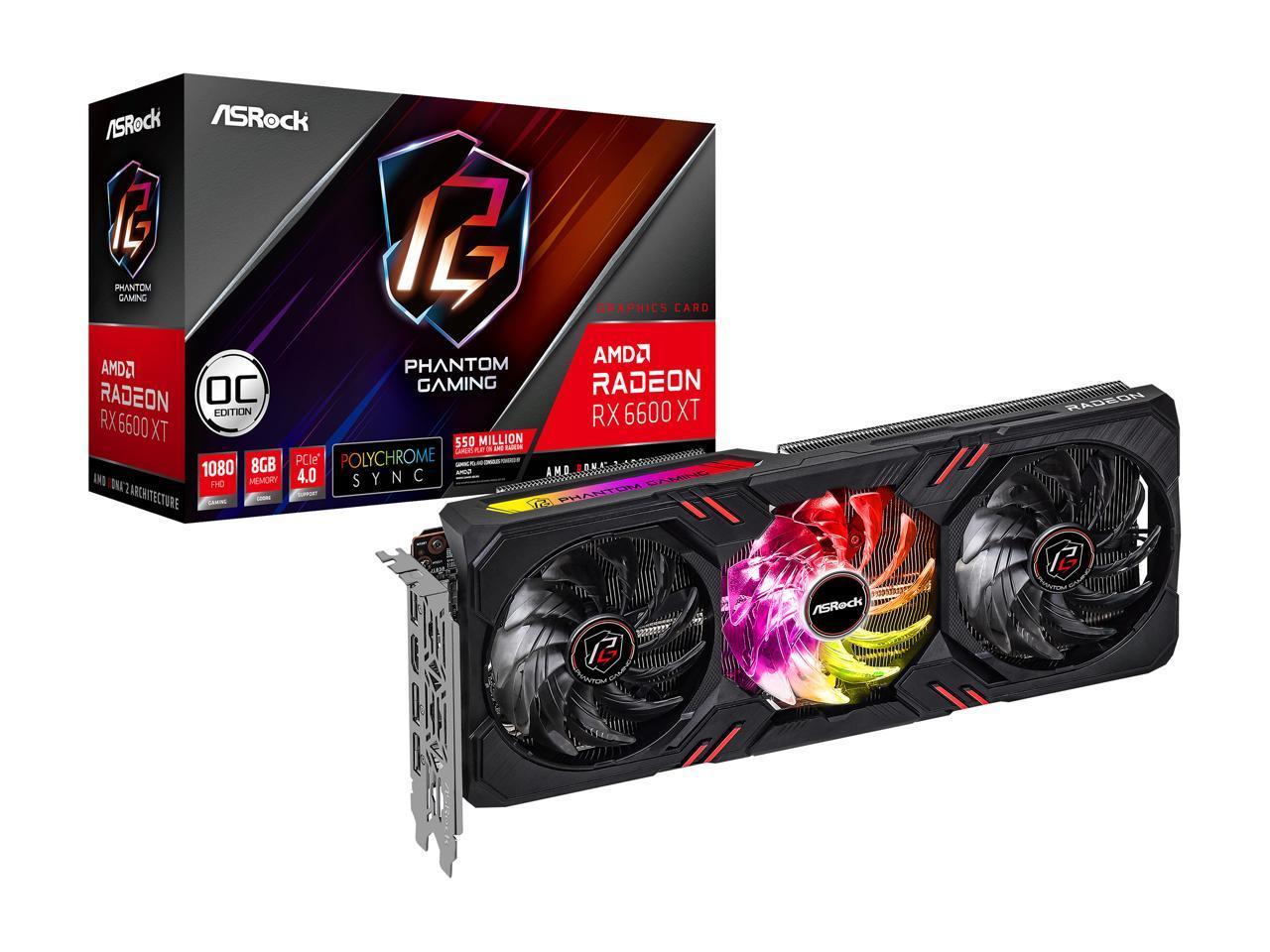 Speaking of its design, this card looks fantastic. It features a stylish metal backplate, three striped axial fans, and nice-looking heatsink shroud with built-in ARGB LEDs. Its heatsink also features air deflecting fins to deliver improved airflow, resulting in whisper-quiet operation and lower operating temperatures. Under full load, the RX 6600 XT operates at temps between 55 and 60°C, and produces around 31 dB of noise, which is more than ideal. Its only flaw is that it’s quite expensive, and that it hardly justifies its very high price tag despite providing extraordinary performance.

Before he joined ViCadia, Nicholas worked as a journalist for several tech magazines. Over the years he gained a lot of knowledge about computers. His main area of interest are processors, motherboards, and operating systems.
Articles

By Frank Peckett
9 Mins read
The Radeon RX 6800 XT is a fantastic 4K graphics cards that makes no compromises. Here are the best AIB models of the RX 6800 XT you can get right now!
Graphics CardsMining

The Best Graphics Cards for Mining ERGO (ERG) in 2021

By Frank Peckett
8 Mins read
ERGO is becoming an extremely profitable cryptocurrency to mine. Here are the best graphics cards with which you can efficiently mine ERGO.
Graphics Cards

By Frank Peckett
7 Mins read
Today we are comparing GeForce RTX 3060 with Radeon RX 6600 XT. Both cards are perfect for 1080p and 1440p gaming, but each one has its own unique features.