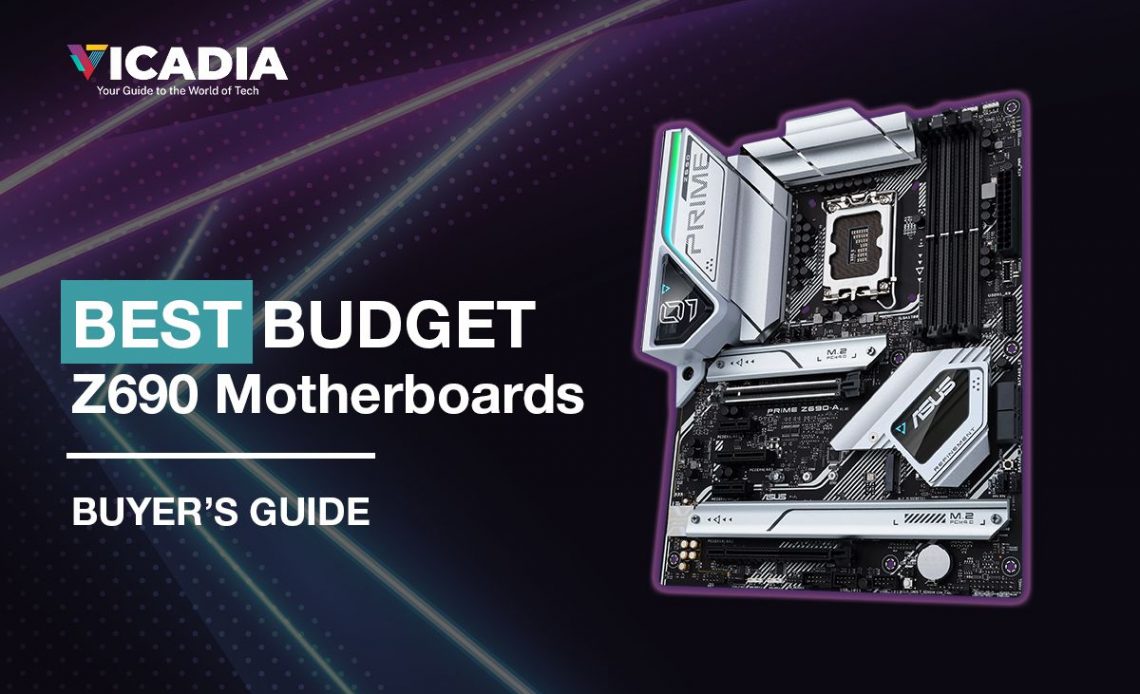 Since Z690 motherboards are specifically designed to be used by PC enthusiasts and workstation professionals, it’s no surprise that most of them come with a high price tag. Unfortunately, Z690 boards priced between $200 and $300 are considered to be entry-level, so before you get any of these, you really want to make sure that the board you’ll be buying won’t be waste of money. In this guide, we’ll review the best budget Z690 motherboards you can get right now.

Motherboards featuring Intel Z690 chipset also bring support for CPUs with a TDP of up to 125 W, however, the maximum supported Turbo Power is around 240 W. This means that Z690 boards can easily handle extreme overclocking, and as such are a perfect fit for Intel’s high-end CPUs, such as Core i9-12900K. Now let’s take a look at the best budget Z690 motherboards that are currently available on the market.

The MSI PRO Z690-A is probably the most coherent and the most consumer-friendly Z690 motherboard out there. Besides the basic model which supports the DDR4 memory, the board is also available in a variant which supports the DDR5 memory, as well as in variants with an integrated Wi-Fi module. Good news is that all four models feature the same 14 power stage VRM from Alpha & Omega (AOZ5016QI), meaning that the board is able to provide good overclocking support.

The MSI PRO Z690-A also comes with two 8-pin CPU connectors, one PCI-E steel bracket, pump fan support, and passive heatsink for the most upper M.2 slot. The board can also boast with three full-sized PCIe x16 slots, two USB 3.2 Gen1 headers and one USB 3.2 Gen2 header. Although it has no RGB lighting, the board does have additional RGB connectors. Overall, this is a pretty good and fairly affordable Z690 motherboard that is able to offer plenty of features for a reasonable amount of money.

Just like the MSI PRO Z690-A, the ASUS Prime Z690-P is also available in a DDR4 and DDR5 variant, as well as in variants featuring an integrated Wi-Fi module. Right now, buying the DDR5 model is pretty much pointless, since DDR5 memory is hard to obtain, and is quite expensive. Despite their minor differences, all ASUS Prime Z690-P boards come with a 14 power stage Vishay SiC654 50A voltage regulator module which, to be honest, is one of the weakest VRMs you’ll find on Z690 boards. Nevertheless, this VRM is still quite capable and can handle even the most power-hungry CPUs, such as the Core i9-12900K.

Speaking of its other features, The ASUS Prime Z690-P can boast with one PCIe 5.0 x16 slot, and one PCIe 4.0 x16 slot, as well as with three PCIe 4.0 x4 M.2 slots. The board also comes with multiple temperature sensors, AIO pump header, overcurrent protection circuits, and support for DDR4-5333 memory. Unfortunately, the board features only 4 SATA ports (which for some users may not be enough), and has only four USB 3.2 ports on its rear panel. The main advantage of the Prime Z690-P over the other budget Z690 boards is the fact that it offers excellent VRM cooling performance and efficient CPU power delivery.

If you are looking for a budget Z690 motherboard that supports DDR5 memory, then be sure to check out the ASUS Prime Z690-A D5. Compared to the Prime Z690-P, this board is considerably more expensive, and is only available in a variant supporting the DDR5 memory. The board also comes with a more powerful, 16-stages, Vishay SiC643 60A voltage regulator module, meaning it’s able to provide 20% greater current handling capability than the Prime Z690-P.

Besides featuring great aesthetics, this board also comes with a pre-installed I/O shield, integrated RGB lighting, and two M.2 heatsinks for three M.2 slots. In total, this board can support up to four M.2 NVMe SSDs, which is quite impressive, and it has two full-sized PCIe x16 slots for up to two graphics cards. The Prime Z690-A also has an internal Thunderbolt header, and it features two USB Type-C ports (20 Gbps and 10 Gbps). Besides featuring only two PCIe x16 slots, the two other biggest drawbacks of this motherboard are the fact that it has only 4 SATA 6 Gb/s ports, and that it’s not available in variant supporting DDR4 memory.

The Gigabyte Z690 Gaming X DDR4 is probably one of the least expensive Z690 motherboards made exclusively for gaming. The board is available both in DDR4 and DDR5 variant, and can boast with stunning design, large VRM and M.2 heatsinks, as well as with three full-sized PCIe x16 slots which support multi-GPU configurations.

The DDR4 version and a DDR5 version of this motherboard feature different VRMs. Both of them come with 16 power phases 60A voltage regulator modules, however, the DDR4 version has the OnSemi NCP303160 VRM, whereas the DDR5 version has VRM with DrMOS elements. Both motherboards come with 2.5 GbE LAN, USB 3.2 Gen 2×2 Type-C connector, two M.2 slots, and pre-installed I/O shield. Unfortunately, none of them feature any PCIe x4 or PCIe x1 slots, meaning it’s impossible to install an additional Wi-Fi card, or SATA controller. Another drawback is the lack of additional audio connectors, since this motherboard has only 2 of them.

The ASRock Z690 Pro RS is a sub-$200 motherboard based on the Z690 chipset that is primarily intended for users who want to build an Alder Lake PC build on a tight budget. The motherboard is only available in a variant supporting the DDR4 memory, and it comes with a weak 13 power phases VRM that features DrMOS elements. Despite its rather weak power delivery system, this motherboard offers a lot of useful features for a very affordable price.

The Z690 Pro RS features three full-sized PCIe x16 slots, one of which supports PCIe 5.0 (x16) interface, one PCIe 4.0 (x4) interface, and one PCIe 3.0 (x4) interface. The board also comes with an additional M.2 Key-E slot for Wi-Fi PCIe card, as well as with 8 SATA3 ports, and three M.2 slots. There is also an integrated RGB lighting around the chipset area. Unfortunately, the board has no USB Type-C ports, which is a shame, and has only one M.2 heatsink for the upper most M.2 slot. Overall, if you don’t plan to excessively overclock your 12th Gen Intel CPU, and want a motherboard with plenty of PCIe slots, then the ASRock Z690 Pro RS will suffice your needs.

The ASRock Z690 Phantom Gaming 4 is probably the cheapest Z690 motherboard you can get right now. Unfortunately, with low price also come certain compromises, which is why this motherboard may prove worthless if you decide to pair it with a high-end 12th Gen Intel Alder Lake CPU. The Z690 Phantom Gaming features a 9 power phase DrMOS VRM design, which is able to deliver 50A of electric current, but with so few phases it’s not quite suitable for overclocking high-end CPUs.

The board also features only two M.2 slots for NVMe drives, and only 4 SATA 6 Gb/s connectors, but it does come with three additional PCIe 3.0 x1 slots, and one M.2 Key-E slot for PCIe Wi-Fi card. ASRock clearly tried to cut down production costs with this board, so it’s no surprise it features only 1 GbE LAN, and has no RGB lighting or DisplayPort connector. Good thing, however, it that Phantom Gaming 4 does come with a USB Type-C port, as well as with Thunderbolt header, so if you are in the market for a budget, yet versatile Z690 motherboard, this one may suit your needs.

Before he joined ViCadia, Nicholas worked as a journalist for several tech magazines. Over the years he gained a lot of knowledge about computers. His main area of interest are processors, motherboards, and operating systems.
Articles

10 Best White Motherboards in 2022 for Intel and AMD CPUs

By Nicholas Hicks
14 Mins read
Turn your PC build into a white-themed computing machine with these stunning white motherboards. Here our are top picks for 2022.
8.6
MotherboardsReview

By Nicholas Hicks
6 Mins read
The Gigabyte X570S is a high-end motherboard designed for content creators. The board can boast with plenty of features, but its lack of Thunderbolt ports is underwhelming.