The Best Aftermarket GPU Coolers in 2022

These days, most graphics cards come equipped with complete cooling solutions. However, most of these solutions have certain drawbacks. They’re either too loud, or aren’t efficient enough to cool the GPU at default settings, let alone when it’s overclocked. This can be quite an issue, especially if you are a serious PC enthusiast trying to squeeze out the best performance out of your graphics card, or you are a cryptocurrency mining entrepreneur who wants to optimize the cooling of your mining equipment, and extended its lifetime as much as possible. Fortunately, there is a solution for this kind of problem, and it’s available in a form of aftermarket GPU coolers.

Almost a decade ago, aftermarket GPU coolers were extremely popular. This was due to the fact that most graphics card manufacturers produced very inefficient cooling solutions for their GPUs, and aftermarket coolers offered better heat dissipation than stock coolers. Nowadays, most GPUs already come with decent cooling systems. However, when it comes to overclocking, almost any high-quality aftermarket GPU cooler will outperform any stock GPU cooler.

But aftermarket GPU coolers aren’t just useful to users who prefer overclocking their graphics cards. They are also very useful to users who use their GPUs for mining cryptocurrencies. If you mine Ethereum (ETH), or any other cryptocurrency (e.g. Ergo), then you know how stressful can it be for your graphics cards to mine 24/7. Continuous operation and heat kill graphics cards, and investing in proper cooling equipment is necessary if you want to keep your GPUs running cool, quiet, and as long as possible. For that reason, buying an aftermarket GPU cooler is mandatory, especially if you want to preserve your mining equipment.

Just like the CPU cooler, the main purpose of a GPU cooler is to draw the heat away from the GPU’s core and its other components such as VRM and memory modules. GPU coolers come in three different forms: air coolers, AIO (all-in-one), and blowers. Structurally, air coolers are very similar to ordinary CPU coolers, as they consist of a heatsink with heat pipes and fans. Blower coolers are designed to suck out the hot air and push it out. They are very basic, and fairly efficient, but extremely loud. AIO coolers, on the other hand, have liquid cooling loop and a radiator. These coolers are the most efficient, and the most silent, but also the most expensive.

VIEW AT AMAZON VIEW AT ALIEXPRESS

Although it’s not a proper GPU cooler, but only a GPU mounting bracket for liquid cooling AIOs, the Kraken G12 is our top pick when it comes to aftermarket GPU coolers. The Kraken G12 is essentially an installation bracket that allows you to mount almost any NZXT Kraken all-in-one liquid cooling system directly to a GPU without the maintenance of a custom loop. This means you can mount widely popular and extremely efficient AIOs, such as Kraken Z73, Kraken Z63, or Kraken X63 onto your GPU to improve cooling and reduce noise.

The Kraken G12 is compatible with over 30 liquid coolers and 40 different GPUs, including NVIDIA GeForce RTX 20 series and GeForce GTX 10 series GPUs, as well as AMD Radeon RX 500, RX 400, R9 300, R9 200, and HD 7000 series graphics cards. On average, the Kraken G12 is able to provide 40% better cooling than the stock GPU cooler, and it also features a 92 mm fan for active VRM cooling with space for aftermarket coolers. This cooler is available both in black and white color, and its only two drawbacks are its somewhat large dimensions and incompatibility with non-reference graphics cards. 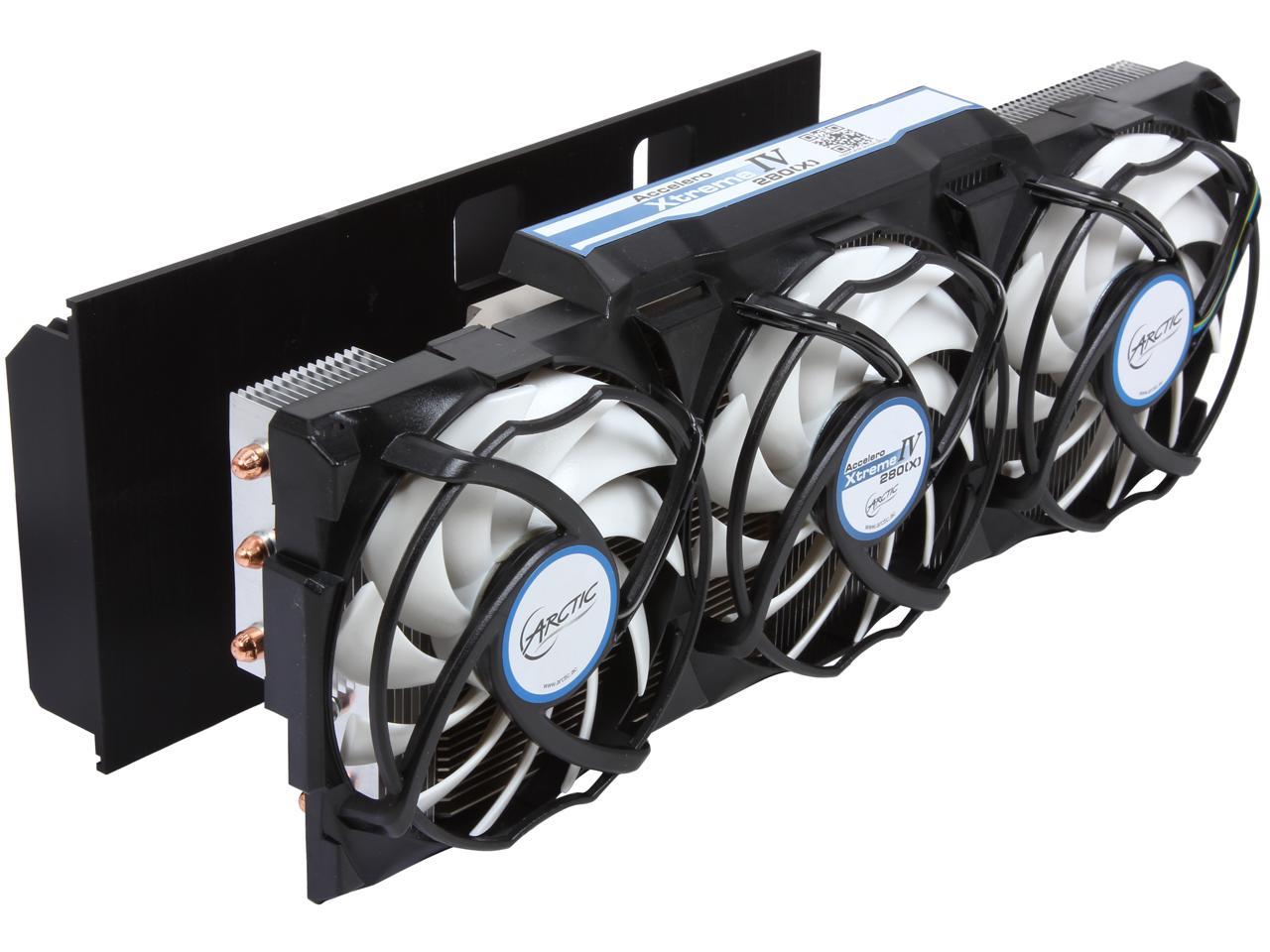 The Arctic Accelero Xtreme IV is an incredibly powerful GPU cooler, and as such is considered to be one of the best aftermarket air GPU coolers ever made. With a cooling capacity of 300 watts, this cooler can deliver unmatched performance, and can lower temps by more than 30 degrees Celsius on some graphics cards, including the GeForce GTX 1080 Ti. It is also worth mentioning that this cooler comes with three 92 mm PWM fans, and features pre-applied Arctic MX-4 thermal paste to ensure efficient cooling, even under overclocking.

Supporting more than 50 different graphics cards, this GPU cooler is incredibly versatile, and features a free mounting system for easy installation. However, this GPU cooler does have some drawbacks. Firstly, it absolutely huge. Measuring 288 mm in length and 104 mm in height (without backplate!), this cooler is only feasible for installation in big tower PC cases. Second, it is quite expensive, but given its fantastic performance, its price is well-justified. In short, if you are in need of an overkill GPU cooler, then Artic Accelero Xtreme IV is your best bet. 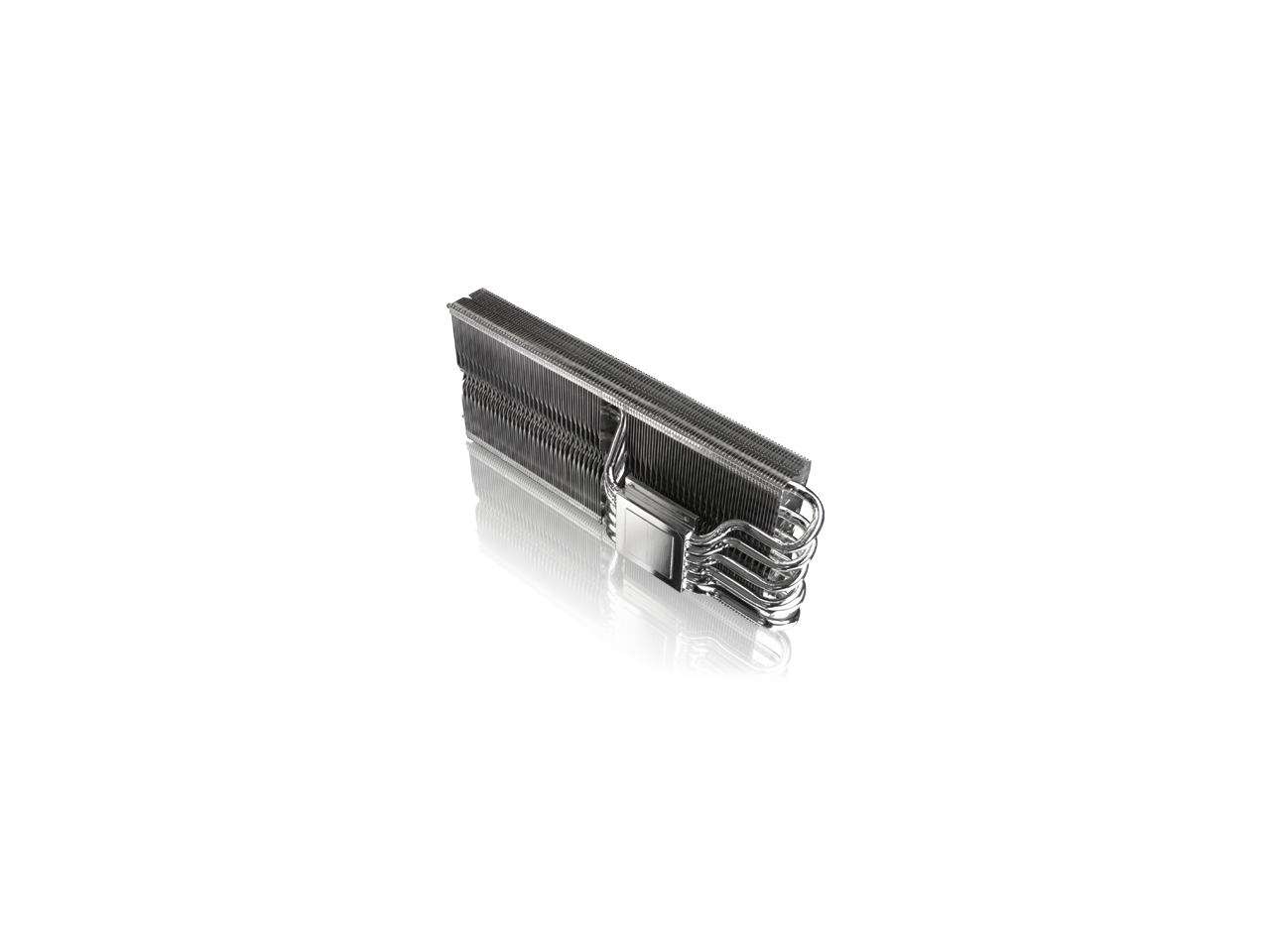 Raijintek Morpheus II is not very well-suited for DIY beginners. In fact, it’s horrible, since its installation process is very complicated and requires a lot of knowledge, patience, and experience with handling aftermarket GPU coolers. However, the end result is simply fantastic, because Raijintek Morpheus II can cool down your GPU better than an AIO liquid cooler, provided you equip it with two 120 mm Noctua NF-F12 fans.

According to manufacturer’s specifications, the Morpheus II supports a limited number of graphics cards, however, this GPU cooler is also compatible with some newer GPUs, such as the Radeon RX 5700 XT. Another advantage of this GPU cooler is that it’s dimensions aren’t too big, which means it can fit in most mid-tower PC cases. Besides its extremely complicated mounting procedure, probably the biggest drawback of Morpheus II is the fact that it’s a very thick GPU cooler. The Raijintek Morpheus II can occupy up two 5 slots in a PC case (depending on the fans you mount on top of it), so keep that in mind when you’ll be purchasing it. 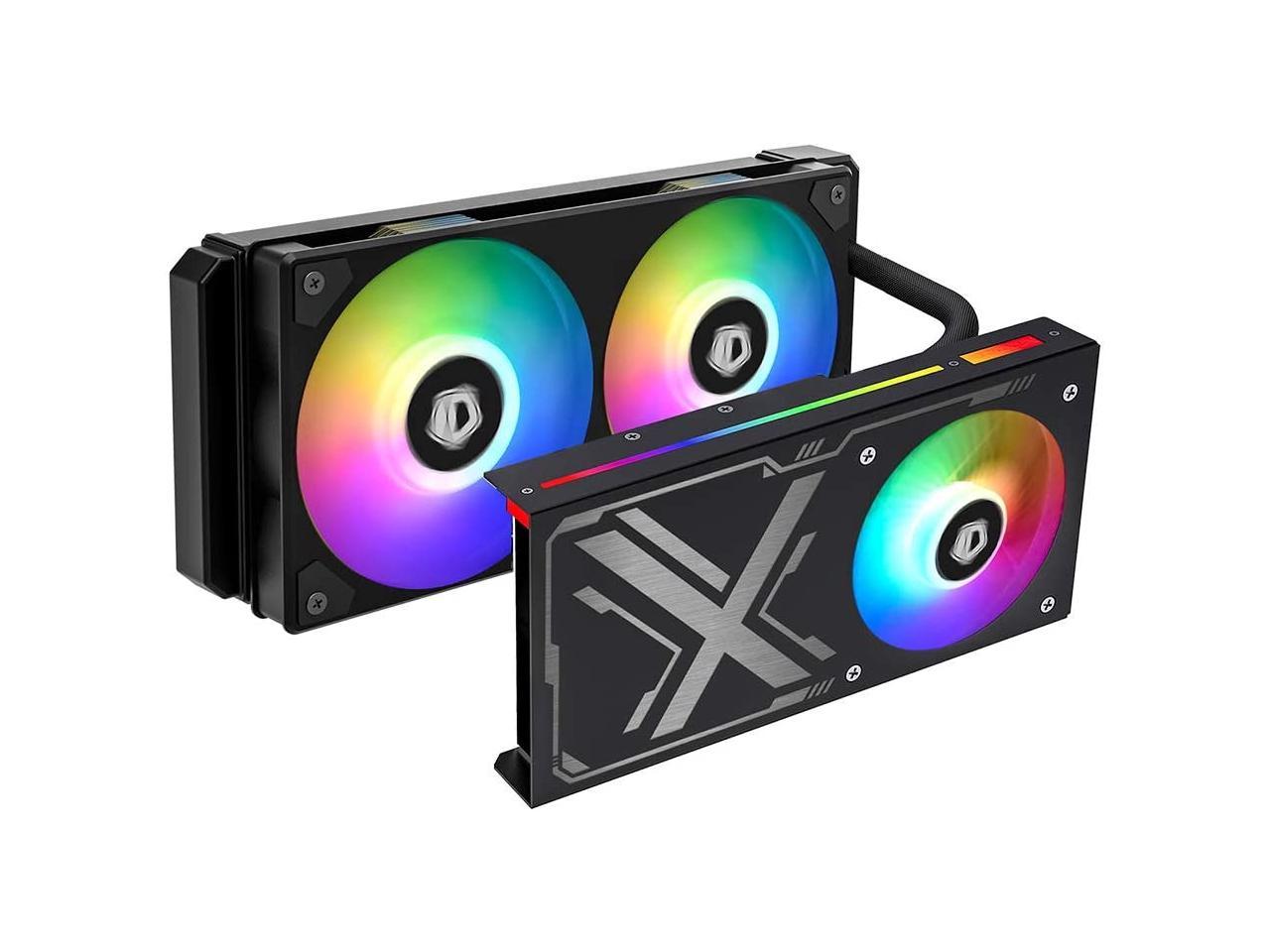 ID-COOLING is a company specialized in manufacturing high-quality CPU air coolers, water coolers, as well as VGA coolers. Its ICEFLOW 240 ARGB AIO cooler is no exception when it comes to quality, and is a perfect solution for users who want to overclock their graphics card, or simply water cool it and reduce the fan noise as much as possible. This cooler is only available in black color, and consists of a heatsink with a shroud and the AIO itself which features two 120 mm fans.

The ICEFLOW 240 GPU cooler also comes with ARGB lighting, and is fully compatible with ASUS Aura Sync, Gigabyte RGB Fusion, MSI Mystic Light, and ASRock Polychrome Sync lighting systems. There is also an ARGB controller for motherboards without any RGB headers which allows you to control lighting as you want. Unfortunately, this cooler isn’t compatible with NVIDIA GeForce RTX 30 series GPUs, and only supports full-sized cards with MOS placed on the right side. Great thing about this cooler is that it features adjustable housing for different PCB lengths, and that it also comes with multiple mounting brackets for easy installation. Performance-wise, this is pretty efficient GPU cooler, as it can keep GeForce RTX 2070 under full load below 45°C without making almost any noise.

If you want to cool down your GPU with a custom liquid cooling loop, then EKWB’s EK-Quantum Vector water blocks are perfect solution for this kind of job. Featuring optimized flow paths that reduce hydrodynamic instabilities and vortexing, EKWB’s water blocks can boast with state-of-the-art precision engineering, and top-notch cooling performance. These water blocks also feature copper cold plates extending the entire length of the PCB, as well as fin arrays populated by 25 microfins with 0.6 mm wide microchannels for optimal cooling performance.

The EKWB EK-Quantum Vector water blocks also feature addressable D-RGB LEDs, and support a wide variety of water pumps. Unfortunately, each EK-Quantum Vector water block is only compatible with a specific graphics card it was designed for, so be sure to check out which model is compatible with your graphics card before you make a purchase. Another drawback of these water blocks is that they’re very expensive, and are not intended for use by DIY beginners.

Anidees RGB VGA cooler is a budget graphics card cooler designed to be used for cooling down weaker GPUs, such as GeForce GTX 1660 series or Radeon RX 5500 series graphics cards. This cooler isn’t mounted directly on top of a graphics card, but is inserted into a PCI slot below the graphics card which you want to cool. What this cooler basically does is that it increases overall airflow within your PC case, and thus feeds your GPU’s stock cooler with more fresh air to improve cooling.

The Anidees VGA cooler features three 80 mm dual ring fans with 12 independent RGB LEDs which support rainbow and static colors. The cooler also comes with a remote controller which allows you to adjust fan speed, as well as customize RGB lightning. There is also support for ASUS Aura Sync, MSI Mystic Light, and Gigabyte RGB Fusion systems. Performance-wise, this cooler is fairly good for cooling down low-powered GPUs, but when it comes to cooling high-end GPUs, such as Radeon RX 5700 XT or GeForce RTX 2080 Ti, it is pretty much useless.

Frank is the Editor-in-Chief at ViCadia. He is an avid PC gamer, as well as a tech enthusiast. Besides being a tireless writer, he is also ViCadia’s web developer.
Articles

By Frank Peckett
3 Mins read
Be quiet! Shadow Rock Slim 2 is an attractive, value-oriented CPU cooler that can boast with low noise and decent cooling performance. Here is our review.
8.3
CoolingReview

The Best AM4 Waterblocks for AMD Ryzen CPUs in 2022

By Frank Peckett
7 Mins read
Proper cooling is essential for users who want to overclock their CPU and keep their temperatures under control. Here is a review of the best CPU waterblocks for AMD Ryzen CPUs.