ViCadia is supported by its readers. If you buy products through affiliate links, we may earn a commission. Learn more
CoolingReview

Shadow Rock Slim 2 is a very decent, simple, low-noise CPU cooler that won’t break your budget. However, its complicated AM4 mounting procedure and lack of RGB lighting leave room for improvement. 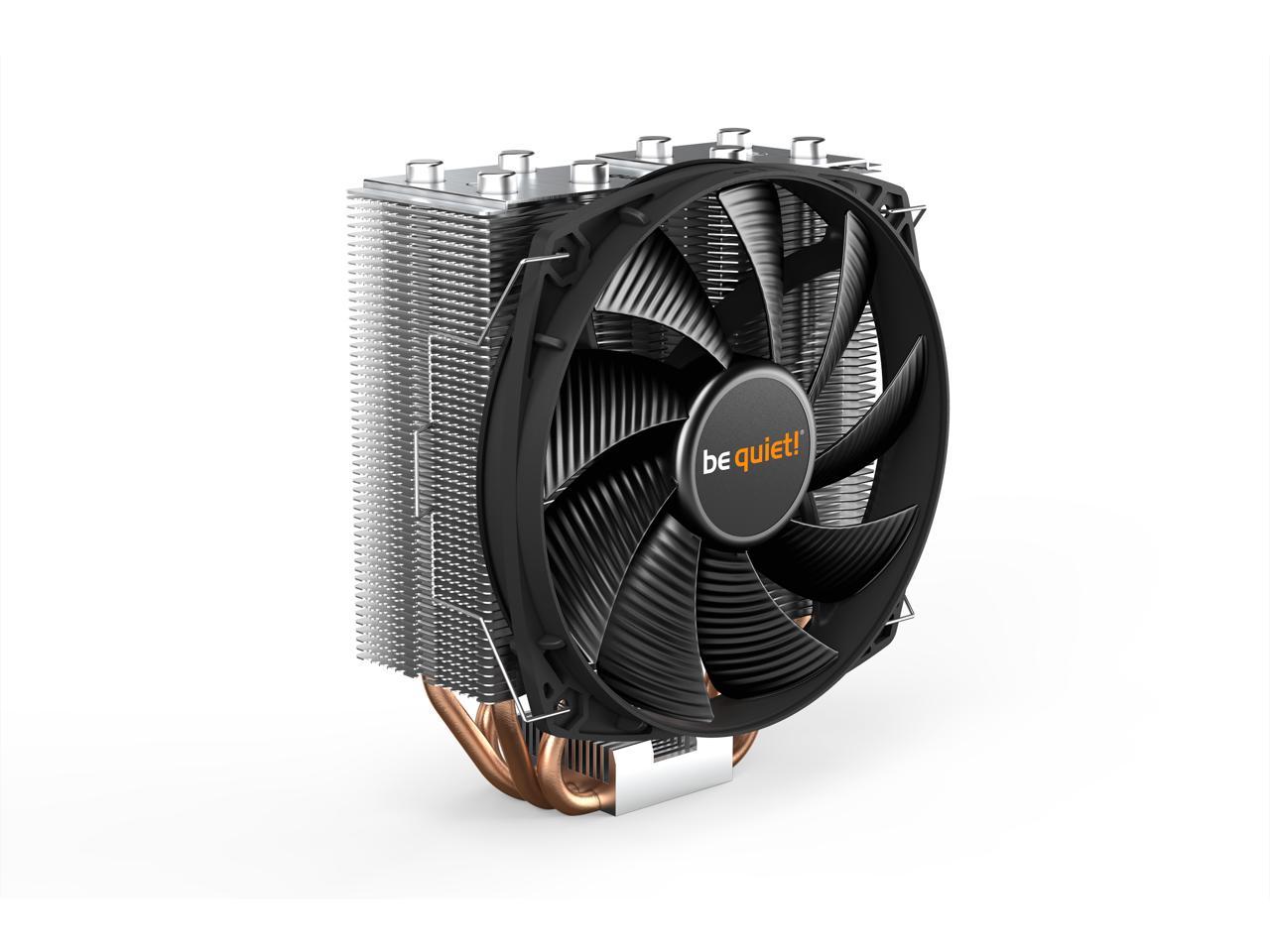 Shadow Rock Slim 2 by be quiet! is a refreshed version of the well-known Shadow Rock CPU cooler. The cooler comes with an instruction manual, a tube of thermal pate, and a mounting kit. Inside the package you also get four clips for mounting two fans onto the heatsink. We were very pleased to see included tube of thermal paste. The assembly of this CPU cooler is quite simple and straightforward, and the manual explains it very well in detail. The cooler comes with a 3-year limited warranty.

Upon close inspection we determined that the cooler’s heatsink measures 52 x 130 x 161 mm. It is a pity that it isn’t slightly lower, but it should easily fit in most PC cases. The manufacturer decided to implement 53 aluminum fins and four 6 mm heat pipes inside the heatsink. The latter directly touch the CPU, which should have a positive effect on temperatures. The Shadow Rock Slim 2 has a TDP of 160 W.

Overall, the cooler looks very elegant. The last fin has the company logo and there are also caps on the ends of the heat pipes. The whole thing is also made of brushed aluminum. There is no integrated RGB backlighting, but you can definitely enjoy seeing this cooler mounted on your CPU. The build quality of the Shadow Rock Slim 2 also appears to be very good.

The installation of be quiet! Shadow Rock Slim 2 is fairly simple, especially if you own an Intel Core CPU. However, the whole mounting procedure is far from ideal, and is quite tricky in case you own an AMD CPU because you first have to remove the plastic retention brackets to mount the cooler.

When mounted on a CPU, the cooler looks very simple, clean, and tasteful. Speaking of RAM and GPU clearance, there isn’t much to be said. Memory clearance with this CPU cooler is pretty good, although the cooler seems to be sitting a bit too close to the memory sticks on most motherboards.

To examine cooling performance of be quiet! Shadow Rock Slim 2, we have used our AMD Ryzen 9 3950X processor. It should be said that this processor is considered to be relatively difficult to cool, since it features multiple chiplets that are not positioned centrally, and most CPU coolers are optimized to cool the central area of the processor. In the chart below you can see our test results:

Performance-wise, we can safely conclude that be quiet! Shadow Rock Slim 2 is a pretty decent CPU cooler. It kept our Ryzen 9 3950X at 30°C while in idle, and it didn’t allow it go past 76°C while it was running under full load. While CPU was idling, the Shadow Rocks Slim 2’s 135 mm fan was spinning at around 700 RPM, while at full load, it quickly reached 1378 RPM. Average idle noise levels were around 35 dBA, while full load noise levels reached 46 dBA, which was audible, but very tolerable.

With this kind of performance, be quiet! Shadow Rock Slim 2 allows you to mildly overclock your CPU without any worries of experiencing temperature throttling. This is also a very quiet fan, which means it is a great solution for users who want to replace their stock CPU coolers with something less noisy.

Be quiet! Shadow Rock Slim 2 is a very attractive, value-oriented CPU cooler. It is also a well-made and elegant looking cooler. At maximum speed, its 135 mm fan is audible, but it shouldn’t be a problem for most users. However, its cooling performance in relation to the price alone is not very impressive. The cooling itself is not bad, but at the price of about $45 you will certainly find much more efficient CPU coolers.

The biggest drawback of this cooler is its mounting procedure for AM4 CPUs. This is something that be quiet! needs to address as soon as possible, since holding mounting arms, backplate, screws and spacers simultaneously tends to be very frustrating. Also, this cooler isn’t very well-suited for cooling overclocked CPUs. Sure it can handle more powerful processors, but only without overclocked settings. Overall, be quiet! Shadow Rock Slim 2 is a very decent, simple, low-noise CPU cooler that will surely be much more attractive once its price drops a few more dollars.

7.9
Shadow Rock Slim 2 is a very decent, simple, low-noise CPU cooler that will surely be much more attractive once its price drops a few more dollars.
7.5

Frank is the Editor-in-Chief at ViCadia. He is an avid PC gamer, as well as a tech enthusiast. Besides being a tireless writer, he is also ViCadia’s web developer.
Articles

By Frank Peckett
15 Mins read
Offering flagship performance and incredible charging speeds, the new Xiaomi 11T Pro manages to pack a lot for a good price. Here is our review.